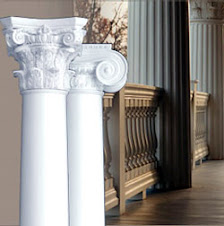 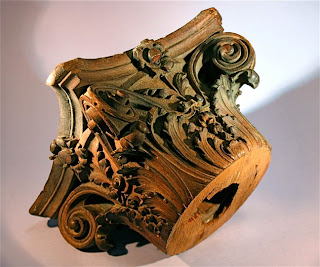 Tree trunks undoubtedly provided inspiration for the first columns ever used in architecture. To this day, wood remains a valid and rather high-end option for both exterior and interior architectural columns. Here I have a little collection of various architectural wood columns.


Perhaps the most important distinction is whether or not to emphasize wood as the material used for any given architectural column. A coat of acrylic paint can easily make a wood column resemble a plastic or composite column, at least if you are looking at a distance. However, for a truly authentic look wood can be irreplaceable. Depending on the level of detail these columns can be quite pricey. 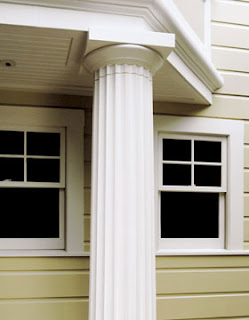 Painting wood columns allows designers to emulate and define many traditional styles, even the most extravagant. 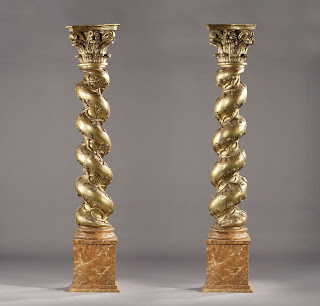 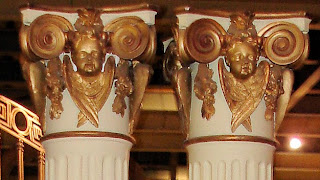 Your second option is to expose the natural texture of the wood column. This is particularly desirable if you have the budget for elaborate carving. 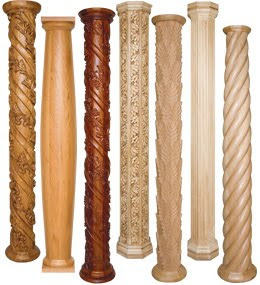 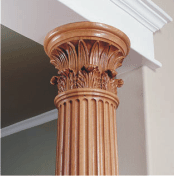 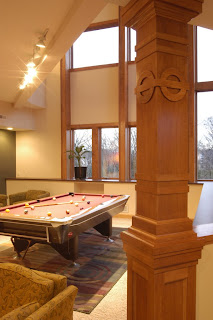 Finally, in many cases the look of wood columns is needed even when there is no money to be spent on authentic wood.

Single columns - a word of caution 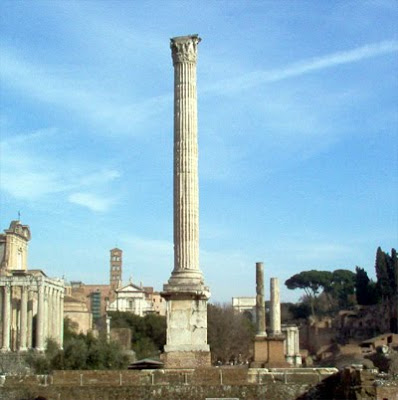 Here is a word of caution regarding the use of single architectural columns. The article was published in "The Civil engineer and architect's journal" in 1848, but the advice can still be heeded.

"The idea of erecting single colossal columns as monuments and architectural objects, was, no doubt, borrowed by the Romans from Egyptian obelisks. Inasmuch as they are both lofty, upright objects, exceedingly well calculated to show at a considerable distance, the column and obelisk agree; but they also differ quite as much, and the difference is decidedly in favor of Egyptian taste. Whereas the obelisk is evidently a monument—a pillar erected to record some fact or facts, or dignify some locality, and is every way fitted by its shape to stand as an insulated, independent monolith, the column plainly expresses itself to be a component member of a fabric; therefore taken by itself alone, meaningless,—in the condition of a verb without a noun, or a noun without a verb. Not only does the column suggest the idea of a super-incumbent architrave, for supporting which it is intended,—'but detached from it, acquires a top heavy and unstable look, the very reverse of that attending the pyrumidum in which the obelisk is made to terminate, and which produces an obtuse apex, instead of the whole being prolonged to a sharp point, like a spire. Except its general proportions as to height, there is nothing that recommends a column tor officiating in lieu of an obelisk. The so employing it manifests very great poverty of invention and barrenness of ideas,—the inability to devise new and more appropriate forms for new purposes. What is characteristic in the column, considered as an architectural member, destined to support either a horizontal entablature or an arch springing from its capital, ceases to have propriety or meaning in a pillar erected merely as either an ornamental object or a votive monument. Such monument may still be a pillar, but it should be one expressly adapted to its peculiar purpose ; therefore, the less it resembles any of the so-called " orders," the better. In this respect, the Rostral column possesses a decided advantage: it shows itself most plainly to be neither more nor less than a trophy pillar. A column of that kind does not look like a fragment of a building. In a building, such form for the columns would be preposterous. To employ Architectural columns as detached monumental pillars, savors of pedantic and puerile conceit, akin to that which during the Elizabethan period fashioned chimney shafts into columns, designed, more orthodoxly than tastefully, according to some one of the "regular" orders."

Among all architectural elements columns are possibly the most sensitive to lighting, because their unique shapes are only revealed when just the right combination of light and shade is achieved. In this example, an additional effect is created by the shadows of the beams falling on the columns. 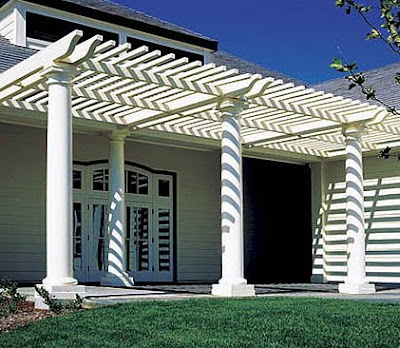 It may appear that the railing is missing from this porch. The point is however, that when designing porch columns you have to achieve a balance between creating privacy and being able to enjoy the view from the porch. Do you have a nice view or are you willing to sacrifice it in order to have a stunning facade? 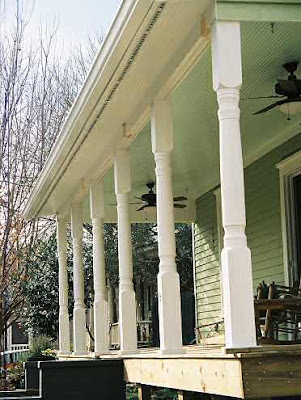 In the design below, the same type of columns used on the porch is also used inside the house, tying the two elements together. It is absolutely essential, however, that the columns inside are also independently relevant to the space that they occupy. They must perform a certain function and they should not be crowding the room.

Architectural columns that we use today are generally inspired by Greek and Roman architecture. It is often forgotten that in those days columns (as well as statues) were not usually left white. Instead, they were often painted. The design that you see below follows that particular tradition. Adding some color to the columns can help keeping a certain style of the house that you chose, without making a leap to the neo-classical look that is almost inevitably created by columns. 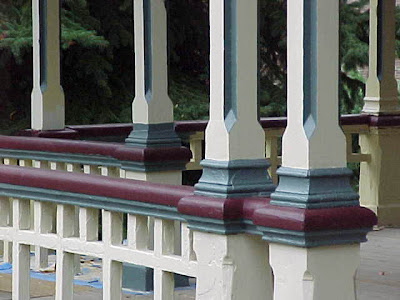 Porch columns have to work well with the entire design of the house. Notice how in this design the columns are well balanced by the external woodwork and the elaborate front entrance door. 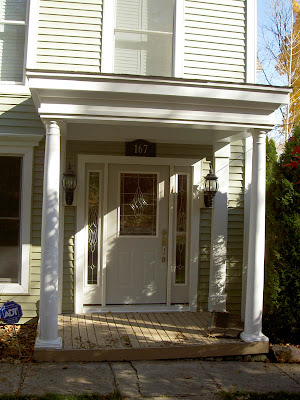 In this design, there is very little space to work with, but the columns define the area so well that the small porch is transformed into a grand entrance. 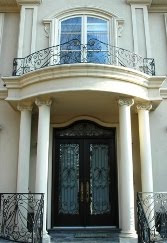 You can notice that the columns in this design are quite simple looking, but they create a backdrop for some very elaborate railings. 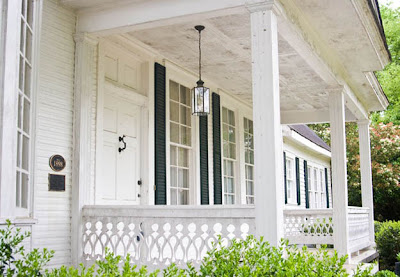 Again, lighting is essential. Porch lights should be installed with full awareness of the columns. This way the columns will look very pronounced and "3d" even at night, in the absence of natural light. 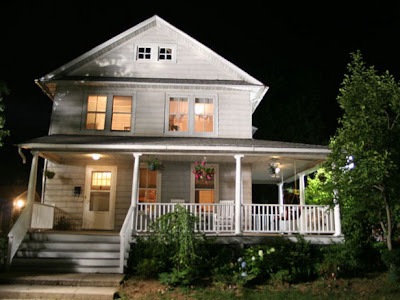 In this interior design example, two columns help define a room which would otherwise appear too open and exposed to the hall space. 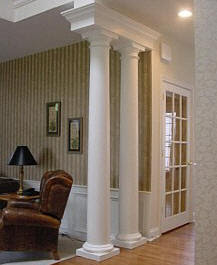 In this example, a single column allows to set apart a dining room space. 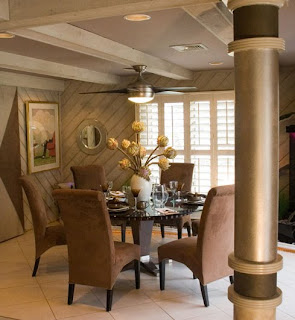 In this music room the main purpose of columns is to go with the theme of classical art and music: 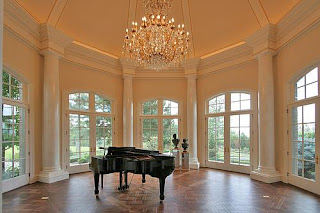 Note the changing light as you go from area to area, even though the columns are identical. It creates an interesting effect and expands the space. 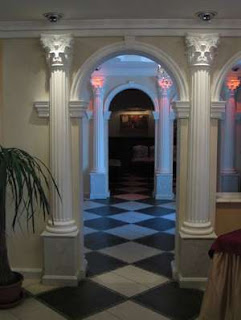 The columns define the room. They may also conceal a large unattractive wall in the back. 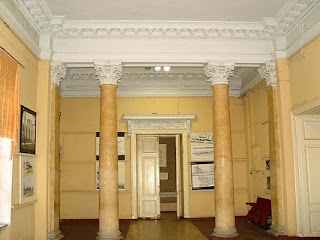 Trees and tree trunks were the original inspiration for architectural columns. This design brings us back to the basics, so to speak. If the columns are load-bearing, this allows to distribute the weight more evenly. 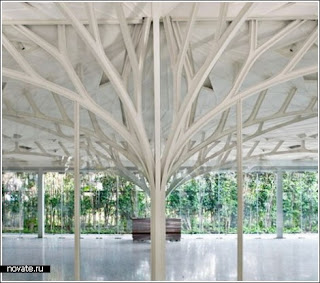 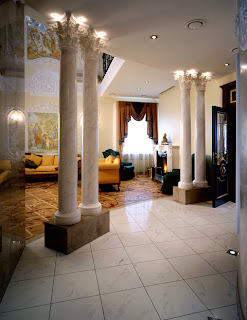 If you are intending to shop for columns, it is very useful to know some terminology. A column with its surroundings is a complex architectural structure. Without knowing the right words you will not even understand your contractor or manufacturers' product information.

Abacus: A slab on the top of the capital of a column.

Acanthus: Any of various perennial herbs or small shrubs of the genus Acanthus, native to the Mediterranean and having pinnately lobed basal leaves with spiny margins and showy spikes of white or purplish flowers. Also called bear's breech.

Apophyge: An outward curve, called congé or scape, connecting the shaft of a Classical column to the fillets over the base and under the astragal beneath the capital.

Astragal: A narrow convex molding often having the form of beading.

Base: The lowest part of a structure, such as a wall, considered as a separate unit: the base of a column.

Capital: the upper part of a column that supports the entablature.

Column: A supporting pillar consisting of a base, a cylindrical shaft, and a capital.

Echinus: A convex molding just below the abacus of a Doric capital.

Egg and Dart: A decorative molding consisting of a series of egg-shaped figures alternating with dart-shaped, anchor-shaped, or tongue-shaped figures.

Fillet: A thin flat molding used as separation between or ornamentation for larger moldings.

Flute: A long, usually rounded groove incised as a decorative motif on the shaft of a column.

Load-bearing: A structural element that supports the weight of other construction elements.

Necking: A molding between the upper part of a column and the projecting part of the capital.

Pilaster: A vertical element projecting from a wall, with a base and capital.

Plinth: A block or slab on which column is placed

Post: A vertical element used to support a horizontal beam or lintel

: A hollow concave molding at or near the base of a column.

Shaft: The principal portion of a column, between the capital and the base.

Torus: A large convex molding, semicircular in cross section, located at the base of a classical column.

Volute: A spiral scroll-like ornament such as that used on an Ionic capital.

Decorative columns in the garden

If you really want to add columns to the number of design features you already have in your home, but there seems to be absolutely no aesthetic or structural justification for their use (it can happen!), take a look at your outside space. Garden columns are an old time favorite when it comes to dividing different areas in a park or simply providing some architectural interest. It is often that these columns do not perform any utilitarian function whatsoever. They can literally be freestanding, provided that their capitals are elaborate and visually appealing in their own right. 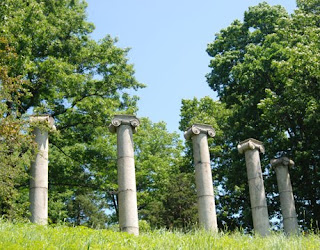 Still, it is much better if you can use your garden columns as planters or as support for hanging plants. Short columns that can be used as planter bases are often called pedestals. Such short columns can also look great in combination with sculptures, bird baths and solar lights. 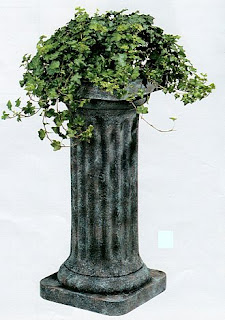 You can even go for a ruin look that was very popular in Renaissance times and in Romantic gardens. Believe it or not, columns are actually manufactured to look broken and aged: 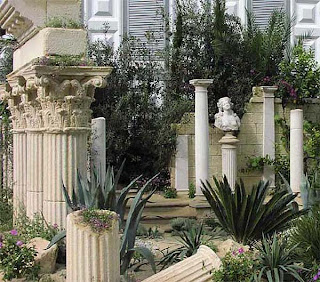 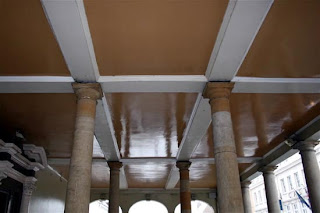 Christopher Wren (1632 – 1723), a great English architect, at the client's request, installed four additional columns in the Windsor Guildhall. The client's concern was that the roof was lacking structural support and was in danger of collapsing. Wren, who was not at all convinced that his design was structurally unsound, probably mumbled to himself something about the fact that the clients always ruin everything. Nevertheless, he built the four columns that apparently satisfied his critics.

The problem is, of course, that these columns do not reach the ceiling, and in fact support absolutely nothing. Upon very close examination, they turn out to be completely decorative! Hundreds of years later, the building still stands, complete with an architect's joke.